Many coil overs are stiff and harsh offering very little shock travel. That will give a bumpy ride at both low speeds and high speeds. Most coil over valving are sometimes linear or progressive. The damping is unbalance and will incur harshness in either low speeds or high speeds. The low speeds may feel ok, but the high speed will feel stiff or vice versa. Then again, you do have “kazillion”-way adjustments, but do they do what you think they do? More on that later…

To end all of this, it’s time to go back to the fundamentals. Struts and springs design. Traditional McPherson strut design offers superior ride quality. Combined with good shock absorbers and uprated springs, the driver can have a high performance suspension without having to sacrifice comfort. Keyword here is shock travel.

KONI Sport Yellows are well known to everyone. They are the only manufacturer that make 3 different types of shock absorbers. Twin-Tube Hydraulic or Low Pressure Gas and Mono-Tube High Pressure Gas. Each car application is tested to determine what type of shock absorber is best suited for that car. Koni shocks have Digressive Valving. Digressive valving means that the shock is valved for both low speeds and high speeds, giving the driver unparalleled performance. The shock absorbers can dampen the car at both speeds. 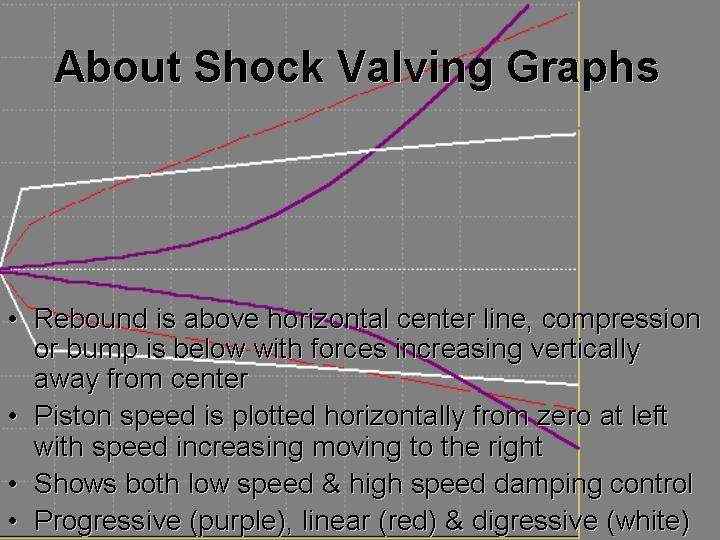 If you notice the WHITE line, the beginning part before the sharp bend is the low speed valving. The sharp upward slope gives the car an improved handling and reduced body roll/lean. As you drive the car faster, the shock piston velocity increases. This will bring you to the second part of the valving, after the sharp bend. The slope of this valving is much less than the previous low speed slope. This slope will still have an improved handling, but the forces are not exponentially increased giving the driver proper damping at high speeds. 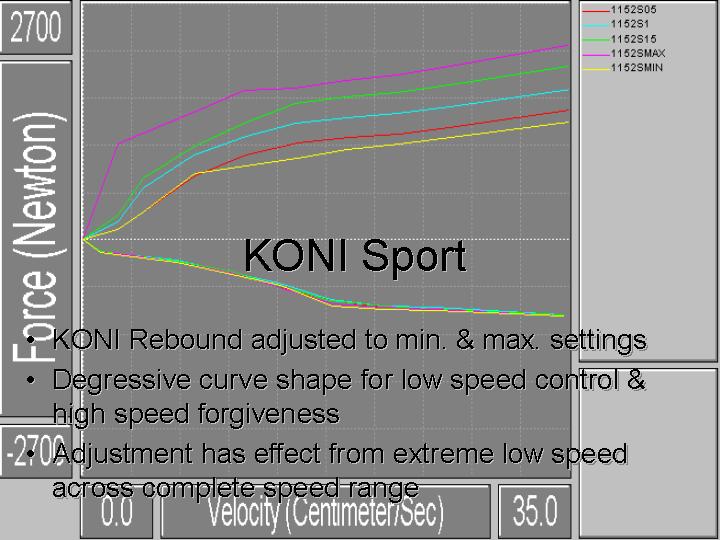 Koni has excellent adjustability. The adjustment range is wide and broad allowing the driver to have a great range of adjustments. Each adjustment turn is definable and actually does only one thing, adjust what it’s supposed to adjust. Many Koni shock absorbers are externally rebound adjustable while some can only be adjusted outside of the car. When you adjust the rebound of a Koni shock absorber, it will only change the rebound forces. This will give the driver predictable results and feel. 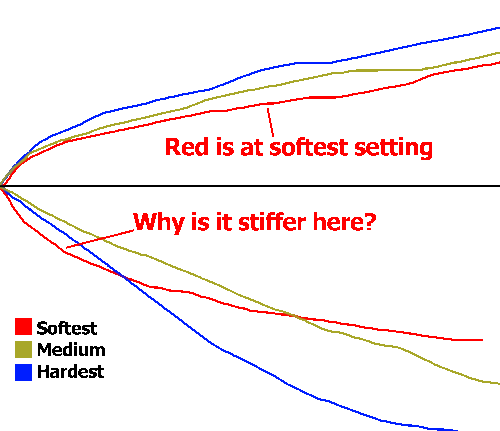 Take a look at this example from the above graph. Focus on the RED line. The top part is compression and bottom part is rebound. The driver would change the compression to the lowest setting, but the rebound would become stiffer at low speeds. That means that your ADJUSTMENT KNOB did not do what it’s supposed to do. Not only did it change the compression, but also the characteristic of the rebound. The adjustment in this sense would become useless and unpredictable.

BEWARE OF THE KNOB

This is a very common problem with mainstream coil overs and many struts/shocks out there. The adjustment knob may not adjust what it’s supposed to adjust  and can affect other characteristics of the shock absorber as well. When you are focused to adjust only rebound, it should be rebound only. Same for compression/bump adjustments. Other unwanted changes will produce bad results that would make it hard for suspension tuning. In addition, adjustment knobs are mainly used to match from one shock absorber to another. It is not meant to be used as an end-all solution to suspension tuning from soft to hard.