It seems that just when you have figured that they could not  make the Nissan GT-R any more better, the crazy speed-scientists at Nissan out-do themselves once again. There is also no better place to unleash this new beast than in Southern California’s “Joshua Tree National Wilderness Park”. 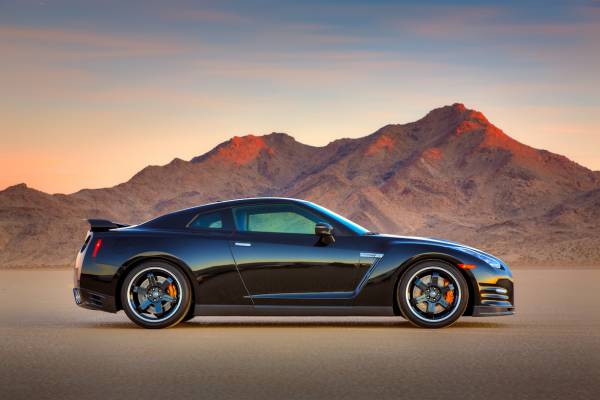 This is the new 2014 Nissan GT-R “Track Edition”, just unveiled at the Chicago Autoshow. It joins the other trim levels of the GT-R models; adding and subtracting a few items to give it its “Track Edition” name. The new GT-R comes freshly equipped with a new front spoiler with carbon fiber air ducts built in and brake cooling air guides. The rear seat has also been removed giving you further reason not to have any kids or second wives but many, many track visits. The full Nissan press release can be found below detailing more of the speed oriented changes.

Make sure to click on the gallery button for amazing photographs of “Godzilla” at one of our State’s most beautiful wilderness parks provided by Nissan.

CHICAGO – The new Nissan GT-R Track Edition, which makes its U.S. debut at the 2013 Chicago Auto Show, is the third and most exclusive model in the 2014 GT-R lineup. Designed to take Nissan’s legendary 545-horsepower street supercar even closer to a pure motorsports competition machine, it features a specially tuned suspension, special brake cooling guides, front spoiler with carbon fiber air ducts and a lightweight quilted cloth mat where the rear seats usually reside. It is set to go on sale at select GT-R certified Nissan dealerships nationwide beginning in May 2013. Production will be limited to 150 cars for the U.S. market.

Changes to the GT-R’s sophisticated 4-wheel independent suspension for the Track Edition include specialized Bilstein DampTronic gas pressure shock absorbers and higher spring rates. Much of the 2014 GT-R’s suspension development took place on the Nürburgring, one of the world’s most challenging racing circuits, where the Track Edition damping force and handling benchmarks were further refined by GT-R development driver Toshio Suzuki. The Track Edition’s air guides for the front and rear brakes were also refined through rigorous track testing.

The Track Edition’s performance enhancements are added to a significant number of upgrades to the GT-R for the 2014 model year, ranging from the adoption of new fuel injectors for enhanced torque response in the 4,500 – 6,000 rpm range and improved throttle and acceleration feel at mid- and high-rpm ranges, to the addition of an oil pan baffle to stabilize oil turbulence and oil pressure under high performance driving conditions. An aluminum nameplate is now added to each hand-assembled engine bearing the name of the specially trained “Takumi” craftsman who built that individual engine.

In addition to developing 545 horsepower, the GT-R’s standard VR38DETT V6 produces 463 lb-ft of torque. The engine is backed by an advanced paddle-shifted sequential 6-speed dual clutch transmission, which can be driver selected to shift at race car-like speeds (0.15 seconds). The sequential-shifting transaxle features separate wet clutches for the odd (1,3,5) and even (2,4,6) gears and pre-selects the next highest and next lowest gear for quick shifts. It also features Hill Start Assist for easy starts on uphill inclines. High performance differential oil, used in GT-R motorsports competition, is standard.

The Nissan GT-R’s unique Premium Midship platform, created expressly for use with the GT-R, enables the use of a world’s first independent rear transaxle ATTESA E-TS all-wheel drive system, which optimizes weight distribution and handling capability. The rear drive-biased system can vary torque split from 0:100 to 50:50 depending on speed, lateral acceleration, steering angles, tire slip, road surface and yaw rate.

In the interior, the new GT-R Track Edition includes special blue-trimmed high-grip front seats that use a special leather and fabric appointments. And, like all 2014 GT-Rs, the Track Edition’s interior offers a cockpit-style instrument panel with a large center-mounted tachometer, a large metallic-framed center console with ergonomically designed shift lever, a red “engine start” button and carbon fiber interior trim.

Concluded Loing: “The new Track Edition sends the message that when it come to Nissan GT-R performance, there is no endpoint. We will continue to push its development and keep the competition in the rearview mirror. The legend continues.