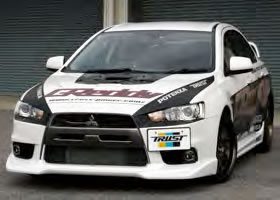 GReddy Performance Products is proud to announce the production of some much need products, for hard driving Evolution X, with two new Circuit Spec Cooler Kits. The V-mounted SST (MR -twin clutch transmission) and Engine Oil Coolers increase the efficiency of the OEM coolers, by increasing the fluid capacity and cooling surface area, while controlling and improving air-flow to the cores.  The factory SST transmission found on Evolution X MR are known to trigger a “Safety” limp mode when the internal fluid hits 140C (284F,) which is not difficult to do during hard driving. 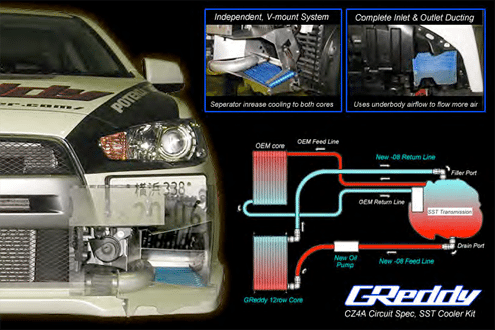 The GReddy SST Cooler Kit uses an additional independent system with it’s own compact 160l/hr pump for superior cooling. It is easily installed by connecting to the existing fluid “Filler” and “Drain” ports on the transmission case. (NO machining required.) The V-mount arrangement is mounted in the front left inner fender under the factory unit (and to fit it, it also includes a new aluminum I/C outlet piping.) Another benefit is that vital areas, like the Radiator, are not covered. The kit also includes carefully designed Inlet and Splitter Ducting to evenly divide and control airflow through both the GReddy and OEM cores, while the Outlet Ducting helps increases flow. The Vmounted 12row (-08) GReddy core takes advantage of the airflow under the vehicle to draw out even more air through the core, (while the stock core has to fight with the air turbulence of the spinning wheel in the wheel well.)  Also included are precise patterns for trimming of the under liner. 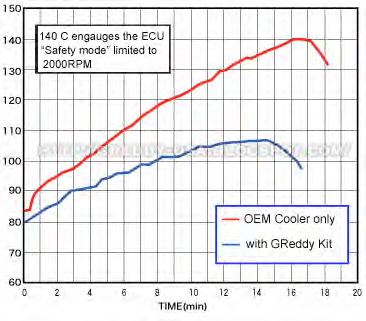 Tested at Tsukuba Circuit, Japan, with one test driver, and two identical CZ4A Evolution Xs with SST transmissions (1 Stock, and 1 with both GReddy Circuit Spec Coolers.)  After about 16min of circuit driving, the factory equipped car reads 140C and the ECU
engages a 2000RPM limiter.  The GReddy equipped Evo, drove on for 30min, without any adverse effects to performance. 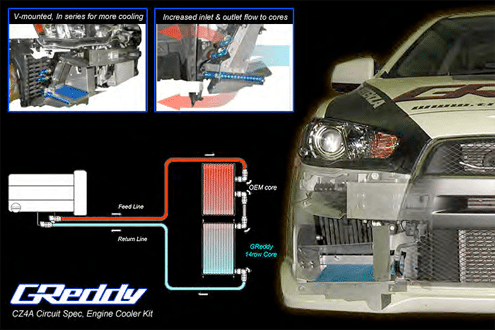 Mounted in a symmetrical configuration as our SST Cooler the GReddy Circuit Spec Engine Oil Cooler Kit mounts in the right inner fender under the factory core. Like our other Circuit spec kits this V-mounted 14row (-10) core uses our signature inner fin technology for high efficiency. This greatly helps improve the durability of the engine oil and in turn the life of the engine. The kit adapts to the factory cooler and routes the oil in series, for an simple install. The kit also features carefully crafted Inlet, Splitter, and Outlet Air Ducting to increase flow to and through both the GReddy and factory coolers. Light-weight Nylon-braided hose add to the upgrades on this kit; as does the necessary trimming patterns for a perfect fit. 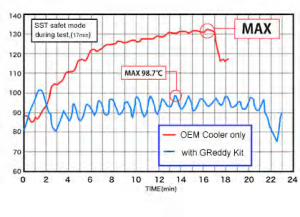 Tested at Tsukuba Circuit, Japan, with one test driver, and two identical
CZ4A Evolution Xs with SST transmissions (1 Stock, and 1 with both GReddyCircuit Spec Coolers.)
The GReddy equipped Evo show consistent engine oil temperatures in the 90-100C range, even under hard circuit driving.

While the factory car showed already showed over 130C (266F) engine oil
temp., when the SST triggered the safety mode at 14min.