On August 3, 2013, TRD Japan released two new concept Toyota GT86 Cars that noticeably take stylistic cues from the company’s “Griffon” Race car.  TRD released a both a track ready version of the GT86 as well as a street oriented vehicle at the Fuji 86Style festival in Japan. Both of these cars are mere concepts as the TRD Japan web page suggests. In our eyes however, they almost look production ready.[youtube height=”HEIGHT” width=”WIDTH”]https://www.youtube.com/watch?v=G1Tue_zyMQI&list=UUbl3JZ9nnnD3kQOAus6ZqwQ[/youtube]

If you are not familiar with the Griffon concept simply take a look at the video above. The TRD Griffon Concept Race Car is able to put down a time of 58. 407 seconds in the video at the famous Tsukuba Circuit and is the same car TRD japan has been continuously updating. 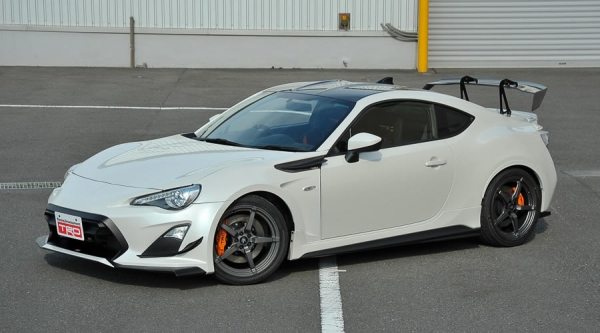 This is the most extreme of the two new concepts introduced at the Fuji 86Style Festival. It resembles the full-on race car the most and even retains a lot of the aero enhancements made to the actual Race car. TRD Japan calls this version the “86 TRD Griffon Track Edition Concept”. 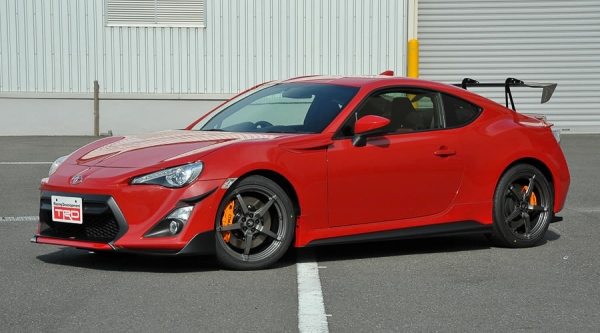 The Street oriented alternative of the new TRD releases, is the vehicle you see above. It offers many of the stylistic cues from the front doors and backwards, but right away one can tell that many of the visual characteristics present on the “Track Edition” from the doors forward are not present on the “Street” edition (with the exception of the blade-like fender ornaments). 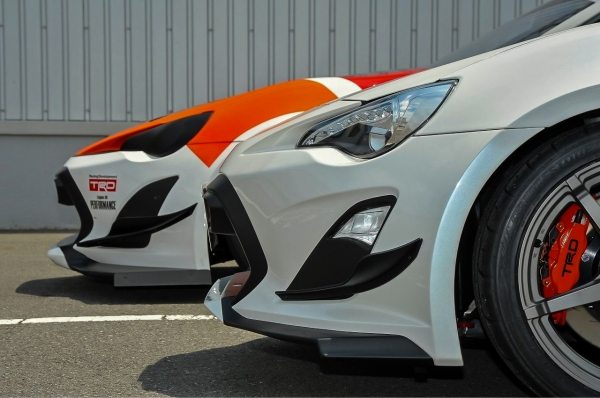 The front fascia of both, The TRD Race Car & the “Track  Edition” Car, are strangely equally lengthened, perhaps holding either a beefier radiator or maybe even a front mouth intercooler for a force induction system. Aside from the shorter front canards, lack of headlight covers, and less protruding front lip, the track concept is almost identical to the TRD 86 race car. 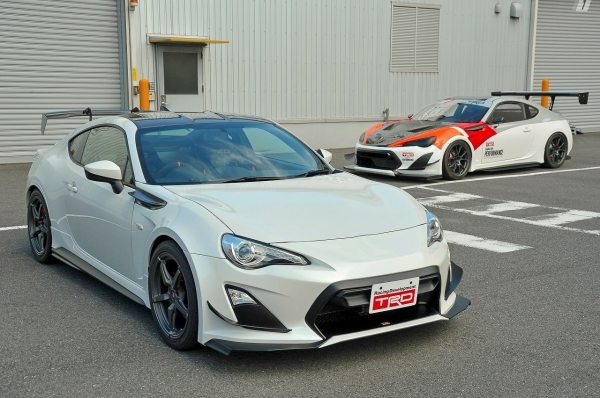 This shot gives you an even better perspective of the two cars side by side. It also lets you see the aggressively carved front fender of the Track Edition Concept. 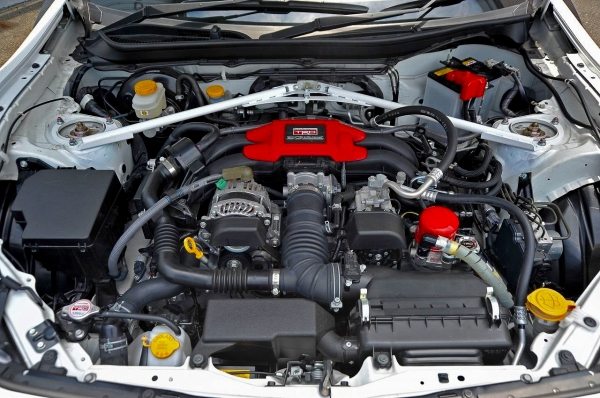 Engine output from both the Track and Street Concept vehicles is the same 200ps and 205nm found on the stock 86 car. From the look of this shot however it seems the vehicle’s upgrades have been made elsewhere. The image hints right away at improvements in chassis rigidity, oil cooling, and even suspension tuning. Visible through the shock tower hole are what seem to be two adjustable coilover dampers. We can tell that they are camber adjustable top mounts as well by observing the image above. They also seem to be pillowball equipped according to the debut page on TRD Japan’s website. 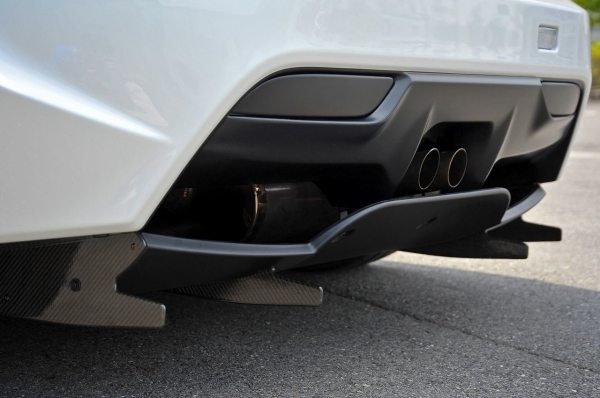 Complementing  the suspension and cooling mods are also a plethora of exterior add ons. This rear under diffuser is a brand new prototype piece that adds a touch of “BeacuseRaceCar” to the Track Edition 86 not to mention improved aerodynamics. While on the topic of aerodynamics, the Track Edition as well as the Street Edition also get front canards, the wind splitting fender fins, and a swan-neck style rear spoiler. 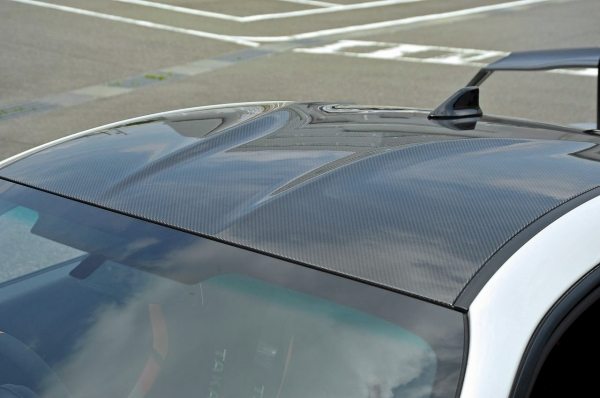 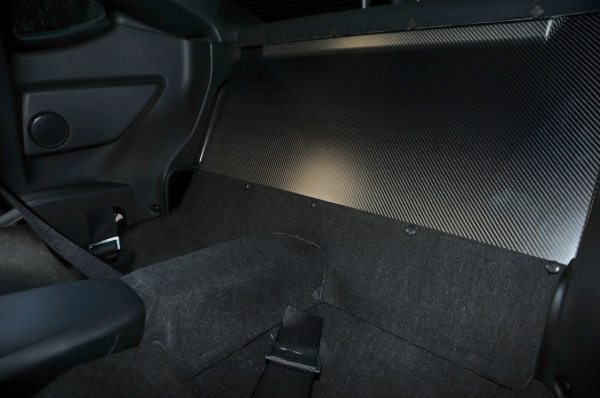 A real carbon fiber roof that replaces the stock metal one helps the Track Edition Griffon shed a few pounds while the lack of rear seat and even more carbon fiber round out the exclusive upgrades on the Track Version 86. 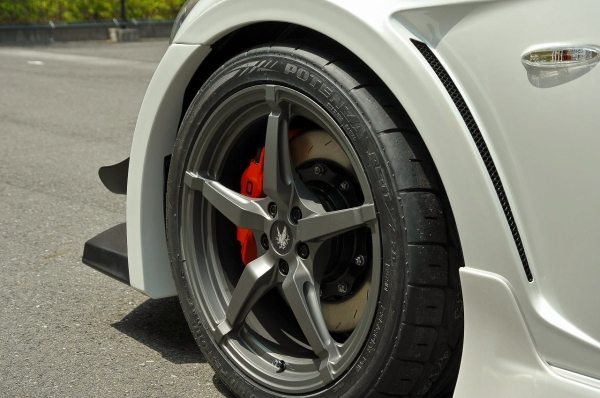 Both cars do come with a set of these exclusive 18 inch forged magnesium wheels however. They don an image of a griffon on the center cap, which at least stylistically, is a pretty cool touch if I do say so my self. Oh and yes both cars also get those massive TRD brakes with 2 piece rotors  as well. 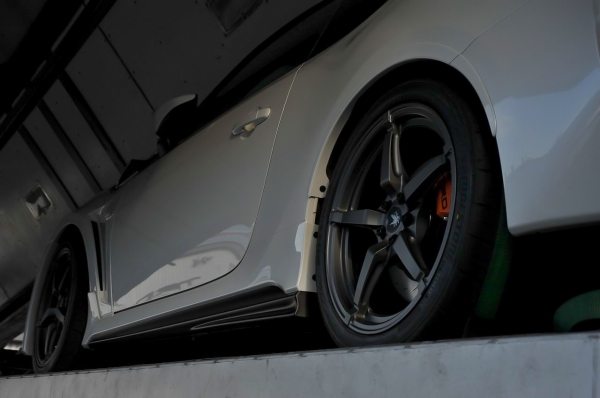 Both vehicles, as mentioned earlier, are still concepts in Japan but have recently garnered a lot of attention. The original design of the Toyota GT86 and the Scion FR-S was an immensely aggressive design in its genesis. Over time however, updates like this one produced by TRD Japan, only enhance the want for a stock car and the need to tune it as TRD Japan has. Hopefully in the next few months the company sees this interest and starts putting some of these goodies into production for the masses.